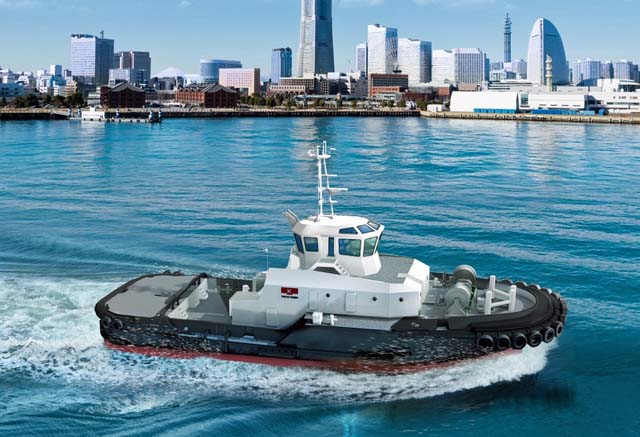 ABB has been contracted by IHI Power Systems to provide its Onboard DC Grid power system, including batteries, for a zero-emission electric tug to be used at the ports of Tokyo Bay for Japanese towage specialist Tokyo Kisen.

The electric tugboat Taiga is the result of a collaboration between Tokyo Kisen and e5 Lab, a Japanese consortium with the purpose of planning and developing fully electric vessels.

Constructed at the Kanagawa Dockyard at Kobe, the tug is due for delivery by end of December 2022, becoming the first vessel of its kind to operate in Japanese waters. It is equipped with ABB’s Onboard DC Grid, with a high battery capacity. Designed to enable zero-emission operations in harbourside environments, the tug delivers superior performance while supporting Japan’s ambition of achieving net-zero GHG emissions from international shipping by 2050.

Tokyo Kisen’s harbour tug will be used to manoeuvre other vessels by pushing or towing them with 2.5MWh battery systems supplied and integrated by ABB, reducing greenhouse gas emissions on a day-to-day basis, and acting as spinning reserve back-up power to prevent prolonged outages. The tug’s future-proof configuration enables it to achieve emission-free operations by integrating alternative energy sources as technologies mature.

Munekazu Tanikawa, Local Division Manager, ABB Marine & Ports, said: “ABB is honoured to be involved in such a prominent project to power the first electric tugboat for Japan. Our hybrid and electric solutions have established a strong reputation in the short-distance shipping segment, now further strengthened by this prestigious opportunity in a highly competitive market.”

Onboard DC Grid, which enables simple, flexible, integration of energy sources and loads. Leveraging Onboard DC Grid, the tug’s engines will be able to run at variable speeds for optimised energy economy at each load level. This helps cut fuel consumption, reducing the environmental impact as a result. The batteries will be able to provide power to the tug’s propulsion system almost instantaneously, where ABB’s Power and Energy Management System (PEMS) will control the overall power distribution, increase fault tolerance and provide a high degree of reliability.