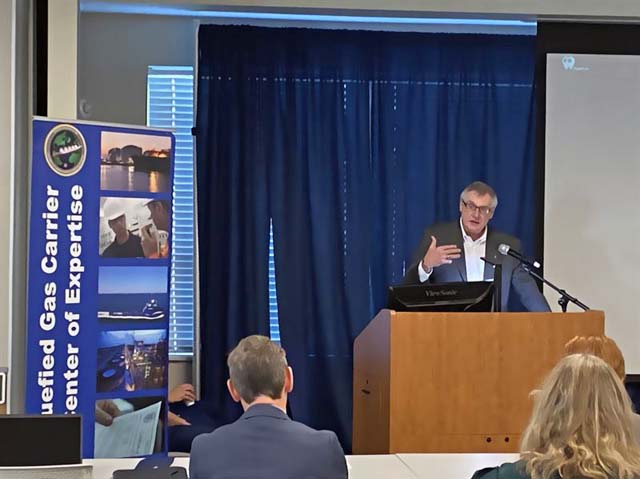 The critical role of LNG in meeting shipping’s decarbonisation goals was detailed by ABS Chairman, President and CEO Christopher J Wiernicki in a speech to US Coast Guard (USCG) leaders at a Liquefied Gas and Alternative Fuels Forum.

Wiernicki said: “We are going to have to begin to balance what we’re facing today, which is, essentially, how do we handle energy security relative to the short-term energy security challenge and the longer-term energy transition? LNG is going to play a leading role in this. However, for such a key fuel for the energy transition, it is important to recognise it is itself a fuel in transition. And we will need it to not only evolve but to address and mitigate the risks inherent in its operation today if we are to reach our 2050 objectives.”

He outlined how an LNG vessel had a decade longer in its operational lifespan than an identical traditionally fuelled vessel, but methane slip represents a significant challenge and after-treatment technologies are still in development. However, the great potential of LNG to contribute to decarbonisation objectives in the long-term is realised through bio-LNG and carbon capture.

Wiernicki said: “Another challenge LNG has to contend with is the carbon content at its core. Here too we can expect to see significant developments. Liquefied biomethane, or bio-LNG, a carbon neutral fuel produced from sustainable biomass resources, has the potential to meet a significant portion of future shipping energy demand. Not only can bio-LNG be used as a drop-in fuel in existing LNG-fuelled engines but it can also be transported, stored and bunkered in ports using the existing LNG infrastructure. But this is just the beginning of LNG’s potential to further contribute to the energy transition. The feedstock of blue hydrogen is methane after steam reforming, when the CO2 produced in the process is captured. While we are scaling up global production of zero carbon green hydrogen, blue hydrogen and by extension LNG, will have a critical role in filling the gap.”