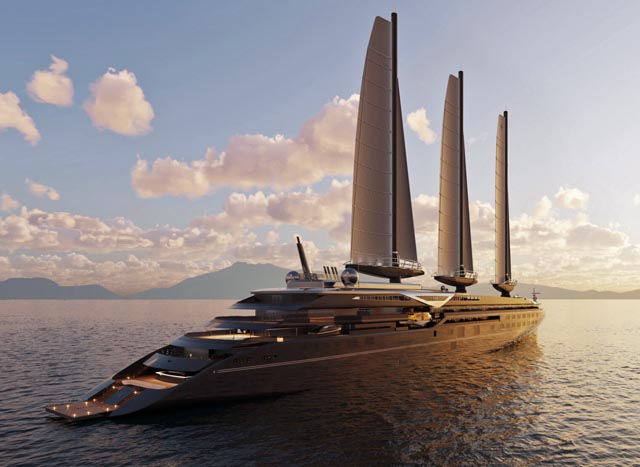 The order for the construction is expected to be confirmed within the next few weeks. The first ship, to be named Orient Express Silenseas, is scheduled to be delivered in March 2026, followed by the second in September 2027.

According to the companies, Orient Express Silenseas is a tribute to the 1930s passenger vessel Normandie, built by Chantiers de l’Atlantique, and which was considered the largest, fastest, most luxurious and modern liner of its time. The roots of the project are anchored in Accor’s Orient Express train, first operated about 140 years ago, and is described as being “among the crown jewels of France’s rail legacy”.

Orient Express Silenseas will have capacity for 120 guests in 54 suites spread over four decks with a surface ranging from 70m2 to 1415m2  for the President Suite. The 220m long ship will be the world’s largest sailing ship and is believed to be the most advanced cruise ship in terms of environmental friendliness. It will use the SolidSail technology which was developed by Chantiers de l’Atlantique, which can provide 100% of the propulsion in suitable weather conditions. The three 1500 m2 rigid sails will be made of foldable carbon fibre panels and hoisted on balestron rigs. The three tilting masts will be over 100m high.  The ship’s hybrid propulsion system will combine wind power with an engine running on LNG. The engine design will allow the use of green hydrogen once the technologies are accepted for ocean-going passenger vessels.

Sébastien Bazin, Chairman and CEO, Accor, said: “With Orient Express Silenseas, we are opening a new chapter in our history: the experience and excellence of luxury travel transposed to the most beautiful seas in the world. This exceptional sailboat, with roots anchored in the history of Orient Express, will offer unparalleled service and spaces with refined designs, reminiscent of the golden age of legendary cruises. Innovation is at the heart of this ultra-modern sailboat which will revolutionize the maritime world with new technologies to meet sustainable challenges. A sailboat designed to leave room for dreams, and a setting welcoming the best of French know-how.”

Laurent Castaing, MD Chantiers de l’Atlantique, added: “With the signing of this letter of intent to order two sailboats, Chantiers de l’Atlantique is proud to open a new era in the shipbuilding industry with Silenseas. This concept born in our design offices in 2018 is the quintessence of our know-how in the fields of naval architecture, the fitting out of sophisticated hulls, as well as the layout of luxurious premises. In addition, the installation of three SolidSail rigs, a revolutionary 1500m2 unit sail propulsion system of which we have developed and tested a first prototype, will make a very significant contribution to the propulsion of the ship. Combined with hybrid propulsion running on liquefied natural gas, Silenseas will thus be the benchmark ship in environmental terms.”

The project is 70-80% financed by commercial banks, the rest being provided by a consortium of shareholders in which Accor will participate on a minority basis.