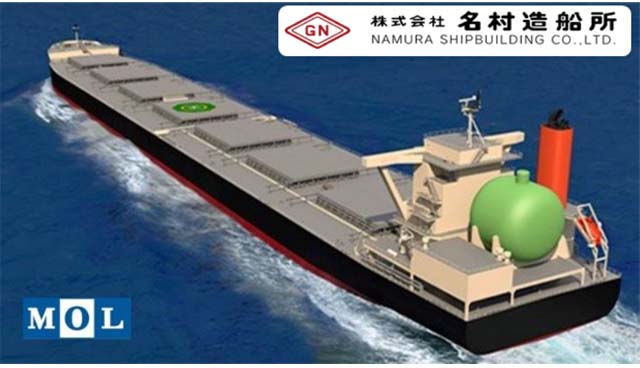 The system is designed to reduce methane slip by placing a methane oxidation catalyst in an LNG-fuelled engine and oxidising the methane. This is believed to be the first time that a methane oxidation catalyst system has received AiP. The system is placed in the exhaust pipes of LNG fuel engines and generators that contain unburned methane, and methane is oxidised on the catalysts to reduce methane slip.

Technology from LNG Fueled Vessels by Improving Catalysts and Engines’ under the Development of Next-generation ship Project of the Green Innovation Fund. Hitachi Zosen and YPT created the system design with MOL and Namura Shipbuilding set to build the actual demonstration vessel and

design the system’s installation. The companies are working together closely to conduct risk assessments and implement other measures. It has now been confirmed that the proposed system meets the requirements of the International Code of Safety for Ships Using Gases or Other Low-flashpoint Fuels (IGF Code) and other regulations.

The project aims to further reduce the environmental impact of LNG fuelled engines by achieving a methane slip reduction rate of more than 70% over a six-year period from FY2021 to FY2026 by combining a methane oxidation catalyst and engine improvements, then verifying the design concept in actual vessels. The AiP is an important first step toward establishing the technology for the system.