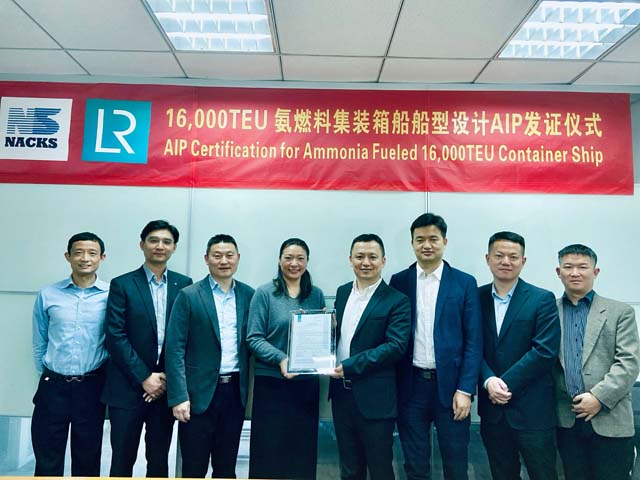 The AiP was presented at LR’s Nantong office and marks another milestone for ammonia as a fuel for container ship propulsion. LR, NACKS and Hudong Heavy Machinery (HHM) started work on the project in early 2021 with the AiP awarded following a risk-based Hazid certification in which the three partners discussed the flammable, highly toxic and corrosive nature of ammonia and attended risk assessment seminars.

As part of the approval process the three parties conducted research and discussion on the arrangement of the fuel tank, the selection of fuel tank material, vent mast positioning, double-walled pipe ventilation detection, bunkering station arrangement as well as detection and fire control of ammonia leakage.

Ammonia has been recognised as one of the more promising alternative fuels for achieving zero-carbon shipping goals. Unlike other alternative fuels, ammonia does not release CO2 when burned, and can meet stricter greenhouse gas emission standards in the future. Its stability and relatively reasonable energy-to-volume ratio create conditions for long-distance transportation. LR believes that application of ammonia fuel in ultra-large container ships and in the wider shipping sector is crucial for the industry to achieve its emission reduction targets set by the IMO strategy for reducing GHG emissions from ships. Together with alternative fuels such as methanol and hydrogen it can be used to promote the development of green shipping.