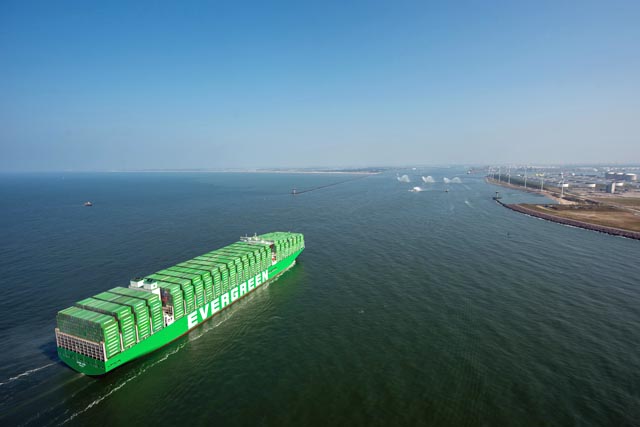 What is currently said to be the world’s largest container vessel, Evergreen Marine Corp’s ‘Ever Ace’ has employed two Alfa Laval PureSOx scrubbers with a shared water cleaning system (WCS) since being delivered from Samsung Heavy Industries in 2021.

The consolidated exhaust gas cleaning solution is considered to offer maximum reliability with a minimal footprint. Ever Ace is the first of 12 vessels planned for Evergreen’s A Class of container vessels of nearly 24,000 TEU capacity. The vessel has a main engine of nearly 60 MW and five auxiliary engines of 4.5MW each.

To clean the exhaust gas, the Ever Ace has two PureSOx scrubbers – one for the main engine and one for the auxiliaries. As hybrid scrubbers that can operate in open or closed loop, they require effective cleaning of the closed-loop circulation water. This is provided by a shared WCS based primarily on high-speed centrifugal separation. Reliability and low operating costs are important factors in Evergreen’s decision-making, and Alfa Laval says its strong references for PureSOx and water cleaning technology played a crucial role in this case.

Alfa Laval’s WCS design was recently updated, providing additional modular options to ensure a compact and cost-effective fit. On vessels with high engine power, such as mega-container vessels, it allows for greater capacity by adding flocculation to the centrifugal separation at its heart. On Ever Ace, the WCS incorporates three high-speed separators, flocculator modules and a feed pump. Though it serves two PureSOx scrubbers with a combined exhaust gas cleaning capacity of almost 200 t/h, the WCS has a small footprint in relation to its high efficiency.

The Ever Ace shared WCS was the first to the new design to be commissioned by the PureSOx team. The limited gas load during a short shipyard sea trial was not enough to test the full WCS cleaning capacity, so Alfa Laval experts followed Ever Ace during a September journey from the UK to Germany and the Netherlands. This provided time for a more thorough WCS evaluation, as well as for crew training and the resolution of open items after leaving the shipyard. Along the route, the WCS could be observed during longer periods with high engine loads. Cleaning performance was high throughout the voyage, even when much larger amounts of circulation water reached the WCS.