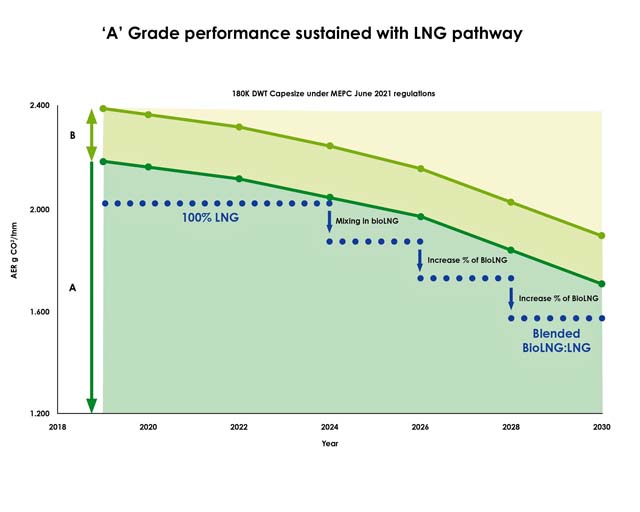 According to analysis carried out by marine fuel coalition Sea-LNG, LNG-fuelled ships will be able to continue to operate as normal under the IMO’s Carbon Intensity Indicator (CII).

Sea-LNG believes the CII scheme is set to shake up vessel efficiency and emissions clauses in the charter party agreements from 2022 onwards. Moreover, after 2030, fossil LNG blended with bioLNG and renewable synthetic LNG will further extend compliance to 2050 and beyond.

The analysis compared emissions for two identical 180,000 dwt Capesize vessels, one using conventional, oil-based marine fuels, the other using LNG as a marine fuel. The results showed that the LNG-fuelled vessel immediately rated two grades higher than the conventionally fuelled vessel. LNG can be the difference between having a ‘moderate’ C-rated ship and having a ‘major superior’ A-rated ship on the IMO’s CII scale.

IMO is encouraging port authorities, governments and other stakeholders to offer incentives for ships with major superior A or superior B ratings. Meanwhile, cargo owners and charterers have recently strongly advocated the use of A or B rated vessels in their supply chains. The superior ratings that LNG can offer should provide a powerful competitive advantage to ship owners, says Sea-LNG.

LNG-fuelled vessels can also gain improved carbon intensity ratings by adopting drop-in carbon-neutral bioLNG in the short to medium term, or zero-carbon renewable synthetic LNG in the longer term. For example, the analysis showed that for every 10% increase in the content of these fuels in a blend with traditional LNG, the vessel gains two-years of additional compliance. By using bioLNG and renewable synthetic LNG, a vessel commissioned yesterday, today and in the future can retain a favourable CII rating as major superior A or superior B throughout its lifetime.

John Hatley, SEA-LNG Investment Committee Chairman, said: “Clearly, LNG will offer a competitive advantage to ship owners and operators as charterers prefer engaging the higher-performing A and B rated vessels necessary to meet their own GHG emission reduction commitments.  Adding bio-LNG or renewable synthetic LNG, both fully interchangeable with fossil LNG in LNG-fuelled vessels and bunkering infrastructure, will enable maintenance of this advantageous rating level over the life of the vessel and ensure that owners are not left with stranded assets.”

CII is a gauge of how efficiently all ships transport cargo measured in grams of CO2 emitted per deadweight ton capacity and nautical mile. Coming into effect in 2023, vessel operators will be required to provide a baseline performance and receive initial ratings in 2024. CII thresholds will tighten annually, requiring operators to document vessel performance and demonstrate it has achieved the required threshold for the year. A ship’s carbon intensity rating, on an A-E scale will be officially recorded in the vessel’s Ship Energy Efficiency Management Plan (SEEMP).

In calculating the impact on CII grades of a change of fuel from HFO to LNG, SEA-LNG used a figure of 20% to represent likely emissions reductions across the broad range of vessel performance. This saving figure is derived from the 2nd Lifecycle GHG Emissions study by Sphera, which indicates that LNG-fuelled vessels are capable of achieving a reduction in their carbon footprint of as much as 30% on a tank-to-wake basis, when compared with an otherwise identical conventionally fuelled ship.