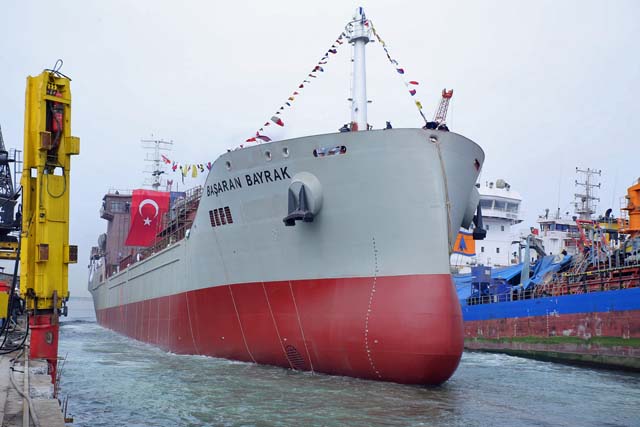 APC’s Turkish division begins work this month applying APC’s MarineLINE coating system on the projects. The new build vessels are the 8000 dwt Basaran Bayrak (NB 80) a chemical/oil tanker being built for the Ceksan shipowner at its shipyard in Tuzla and the 6000 dwt (NB 68) Sedat Basak, a tanker being built for Turkish shipowner Atako Shipping and its partner Nakkas Shipping at the Gisan shipyard also in Tuzla. The projects will be led by Turkish Marine Sales Manager Koray Karagoz supported by APC’s 14-strong team at its Tuzla office as well as APC’s head office in Cleveland, Ohio.

APC Global Marine Manager, Capt Onur Yildirim, said: “APC has been operating in Turkey since 2001 and we have a really experienced talented team which have coated and repaired 450 different chemical tankers in Turkey. APC now has around 80% of the Turkish tank coating market and as a result it is one of our top export destinations and we really look forward to undertaking these jobs. Each contract will see us coat the ships’ cargo tanks and slop tanks with MarineLINE along with application inspection, and full heat curing services.”

APC is said to have won the latest deals due to having a committed long-term presence in Turkey combined with the quality of MarineLINE and its broad range of benefits.

Yildirim said: “The low absorption characteristics and highly glossy surface of MarineLINE allow operators to reduce overall tank cleaning times, which in turn helps reduce fuel consumption and GHG emissions associated with hot water production. This, together with the cargo versatility and flexibility that MarineLINE offers over its competitors, is giving us a real edge. What we mean by versatility is ease of cleaning between different cargoes, meaning operators can switch grades more frequently and easily, with significantly less risk of cross contamination. These are key advantages in the chemical tanker market, where vessels can be expected to transport a wide variety of chemicals.”

The latest Turkish orders follow another new deal for APC with Chinese shipowner Shandong to supply a fleet of 50,000 DWT medium range tankers to be chartered by Shell as part of its Shell Project Solar programme. APC says its maritime sales grew by 40% in 2021 with 56 ships coated equating to over 750,000m2 of MarineLINE applied. APC reports it now accounts for more than 12% of the global cargo tank coating market.