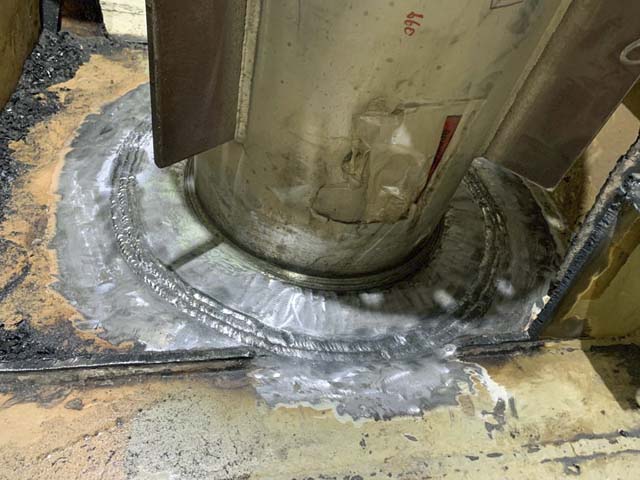 After obtaining the exact specifications so that the new pipes can be fabricated, the pipes were sent to a specialist paint shop to apply Ecospeed, a proprietary protective coating needed to make sure that the pipes will not corrode again, being impervious to the harsh chemicals present in scrubber effluent.

The pipe replacement was begun in Rotterdam and completed in Algeciras, allowing the ship to continue on its schedule without delays. In order to begin the operation in Rotterdam with the ship still afloat rather than in drydock, cofferdams had to be installed underwater on the exterior of the hull to blank off the scrubber outlet.

A diver located the scrubber outlets which then allowed installation of the two cofferdams to proceed. In the engine room, Hydrex engineers removed the two existing outlet pipes. A second shift of diver/technicians moved into the engine room to install the new pipes.

When welding was finished, it was tested by an independent NDT expert and found to be sound. The scrubbers were reassembled. The ship then sailed, with the cofferdams remaining in place until removal could be accomplished without disrupting the ship’s schedule. This was done while docked in Algeciras, where divers removed the cofferdams from the scrubber outlets, allowing the welds to be inspected from the outside. After application of epoxy for further protection, the ship was able to continue on schedule with the new scrubber outlets functioning properly and proofed against future corrosion.