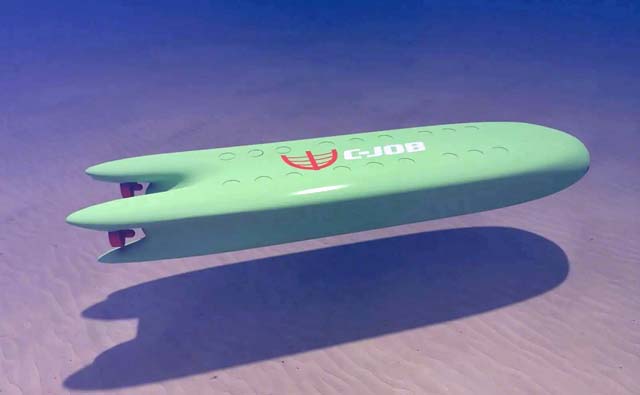 According to naval architect C-Job, reducing the carbon footprint of the global shipping industry and reaping the efficiency gains offered by autonomous vessels have been two of its leading research priorities in recent years, leading to a realisation that autonomy, but also offers enormous potential and represents huge breakthroughs in sustainability, safety, and cost reductions.

However, while others in the sector were working on adapting existing vessel types to make them autonomous using sensors and algorithms, C-Job had other ideas. The company realised that in order to make use of the full potential of autonomous vessels, it would be necessary to start with a blank piece of paper. Only the total redesign of the vessels themselves from the keel up, including the way they operate and the systems they use, could deliver the outcomes that our industry needs. That said, the gradual introduction of autonomous systems on conventional vessels as part of the transition process will be an important feature of shipbuilding and conversion for the next decade or more.

An example of total redesign is the development of the C-Job Autonomous Underwater Maintenance Dredger (AUMD) concept. Not only is it autonomous, it is also a submarine. Revolutionary, but also logical. Submarines are considered more efficient than surface ships as they do not need to push through and over waves, and the energy requirements for dredging decrease the closer the dredge pump is to the seabed. Using simulations that compared the AUMD design to an actual TSHD with the same dredging performance, it was discovered that not only was 55% less propulsion power needed, but also that 80% less dredging power was required with the vessel operating much closer to the seabed than its conventional counterpart.

The AUMD was followed by a second project, with a group of relevant and passionate partners. This involved the development of a battery-powered autonomous guard vessel (AGV) concept design for use in ports and harbours. With the human element replaced by autonomous shipping solutions the result was again a compact, cost-effective, and sustainable solution.

The response to these innovations has been one of great interest, but there is much work still to be done before the marketplace is fully satisfied. The research programme continues to develop with the ALERD project, a new concept that takes the AUMD to the next level. Despite the challenges, the transition to clean, autonomous shipping remains one of the great challenges of our time and C-Job is proud to be taking a leading role in designing transformative vessels that have the potential to deliver unprecedented gains in efficiency and sustainability.