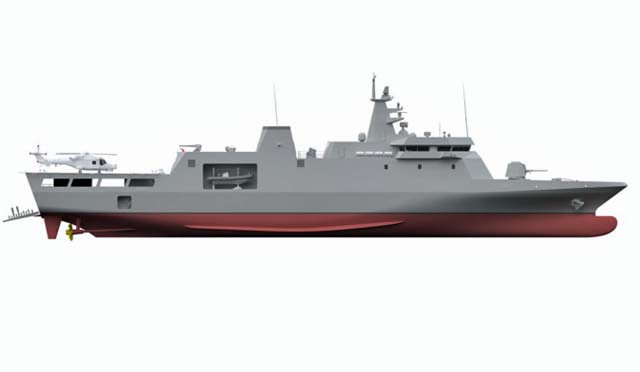 A new concept for an offshore patrol vessel (OPV), developed by Hyundai Heavy Industries (HHI), has been awarded Approval in Principle (AiP) by classification society DNV.

The HDP-2200 was developed with two versions: a baseline and variant design. The baseline design ship has a displacement of 2,400t, is 94.4m long and 14.3m wide, has a maximum speed of 22 knots, a cruising speed of 15 knots, and a range of 5,500 naut miles. The variant design ensures enhanced ship’s survivability by separating the propulsion engine.

The AiP is the result of the second stage of HDP followed by the 1500 NEO 1,500-ton OPV last year and confirms the maturity of the ship’s design. It is based on the DNV Rules for Classification of Naval Vessels RU-NAV / RU-NAVAL with reference class notation + 1A N, Patrol (L), E0, R0. DNV rules for naval surface ships offer various measures and class notations to achieve improved survivability. The requirements of the naval administration essentially shape the extent to which measures are included in a project.

Christian von Oldershausen, DNV Maritime Naval Business Director, added: “We believe HHI’s ship design addresses both the needs of emerging and mature markets, and we look forward to the opportunity to add our expertise in building this innovative ship.”

Vidar Dolonen, DNV Maritime Regional Manager for Korea and Japan, said: “HHI has laid down impressive groundwork in developing a very efficient design for the HDP-2200. We sincerely hope HHI can spearhead into the market with this state-of-the-art vessel concept, and DNV will continue to help HHI to be even more competitive by working closely together.”