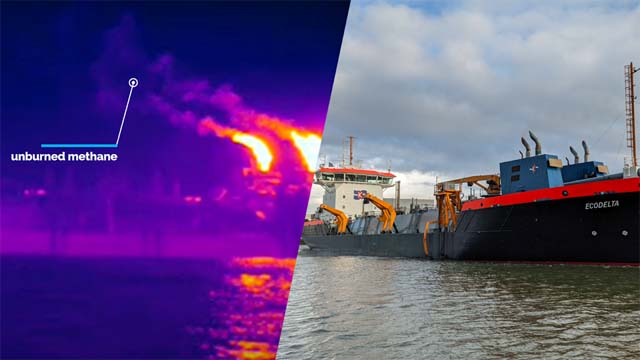 An investigation carried out for T&E in the Port of Rotterdam using an infrared camera with a special filter to detect hydrocarbon gases, showed that the two vessels measured  released significant amounts of unburned methane into the atmosphere with what T&E describes as “alarming repercussions for the climate”.

T&E says that shipping is a huge source of carbon emissions and the switch to clean fuels is slow. It regards HFO as “the dirtiest fuel there is”.  Although it recognises that the industry is working to clean up its emissions, shipping, alongside oil and gas companies, and many European politicians are pushing for liquified natural gas (LNG) as a ‘clean’ alternative to traditional fuels. On paper, says T&E, LNG-powered ships emit less. There is no visible smog, but invisible methane emissions are considered to offer a serious problem – T&E considers that about 80% of Europe’s LNG used by ships is potentially worse for the climate than the fuels they replace, due to the release of methane, a potent greenhouse gas which is over 80 times more warming than CO2.

The two vessels concerned – the dredger Ecodelta and the CMA CGM container ship Louvre – are claimed to enable a significant reduction in CO2 emissions but no mention is made of methane emissions; indeed shipowners and the EU are said, by T&E, to be promoting LNG as a clean fuel. Shipowners commissioned more gas-fuelled vessels in 2021 than the four previous years combined, with LNG-powered ships promoted as a clean alternative to traditional fuels. The proposed carbon intensity targets for marine fuels are forcing shipowners to move away from residual fuel oil, the most widely used shipping fuel today. However, T&E warns that without sustainability safeguards this will simply lock in LNG as the cheapest alternative. Recent T&E analysis shows that over 65% of new ships could be powered with LNG from 2025. This would raise the share of fossil LNG from an estimated 6% today to over one-fifth of all marine fuels in Europe by 2030, locking in fossil fuel use for decades.

T&E believes that the EU must adopt stricter greenhouse gas reduction targets for all ships arriving and departing from European ports, so that the sector achieves zero-emissions by 2050 at the latest. It suggests emphasis on what it sees as truly clean fuels. Green hydrogen-based fuels can massively reduce shipping’s climate impact, but currently they are expensive. If policymakers set mandatory targets and incentives for these fuels now, it would stimulate supply and demand, and make them widely available at much lower costs.

T&E data suggests that about 80% of LNG that is burned today in shipping is in low-pressure four-stroke engines “that have worse total greenhouse gas emissions than traditional engines running on dirty fuel oil.” The estimate is based on the fuel consumed by LNG-powered ships from the European data reporting system MRV, and fleet characteristics from shipowners’ order books.