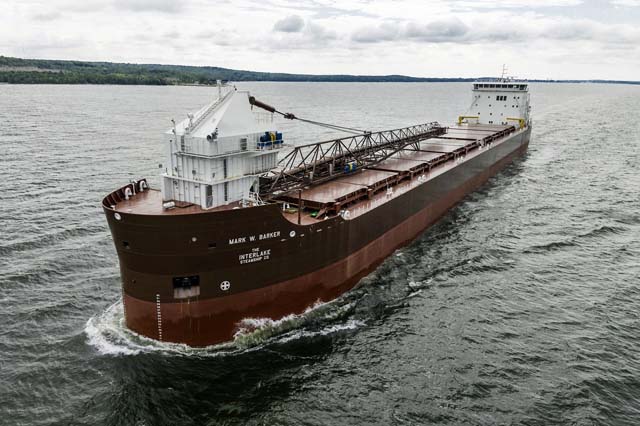 The vessel was built in Sturgeon Bay, Wisconsin, by Fincantieri Bay Shipbuilding for the Interlake Steamship Company. The single screw Mark W Barker was designed to transport salt, iron ore, stone, and other bulk cargoes throughout some of the narrowest rivers in North America’s Great Lakes region, including the tight bends of the Cuyahoga River.

With a hull optimised for energy efficiency, the 28,000dwt River-class bulker is powered by a pair of 400hp main engines driving a single CP propeller through a twin-input, single output reduction gearbox. It is the first ship to operate on the Great Lakes with engines that meet EPA Tier 4 emissions standards, which entered into force in January 2017, requiring marine engines rated at 600kW and above to be fitted with technologies capable of significantly reducing NOx, SOx and particulate matter.

The water lubricated RiverTough bearing was supplied by Thordon Bearings’ authorised distributor in Ohio, Advanced Sealing Technology, along with Nickel-Chromium-Boron (NCB) alloy liner for a propeller shaft diameter of 445mm (17.5in), and two Thordon Water Quality Packages. This is the 6th Interlake Steamship vessel that Thordon’s proprietary polymer bearings have been installed. Wear rates for RiverTough are typically less than half that of rubber bearings, typically 0.075mm to 0.100mm (0.003in to 0.004in) in 6000 to 7000 hours of annual use.

Ian Sharp, Interlake’s Director of Fleet Projects, said: “From the outset, Thordon always responds quickly to our requirements with its bearing expertise, technical know-how and customer service. Having multiple RiverTough bearings in operation with proven reliability made it a very simple decision to choose the same Thordon bearing for our new ship.”