KOREAN REGISTER AND DSME TO COLLABORATE ON AUTONOMY 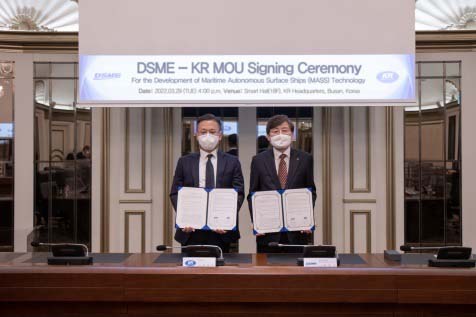 KR describes MASS as the next generation of high-value ships that can act autonomously when working with artificial intelligence (AI), Internet of Things (IoT), big data, and sensors to replace human interactions. The agreement will see the two companies working together to develop autonomous operational technology to ensure the safety of the next generation of maritime transport.

DSME is developing a large autonomous merchant ship that is due to be launched in 2025. As part of its development DSME has built a ship called DAN-V to test the technology it has created based on the smart ship solution DS4. The company also plans to conduct a step-by-step demonstration of DAN-V through operational tests at sea, including equipment interwork and remote adjustment. KR will apply its rules, cyber-security certification and risk-based approval to certify DAN-V based on its digital operating data, in accordance with KR’s Guidance for Autonomous Ships that was enacted in 2019.

Dong-kyu Choi, EVP DSME R&D Institute said: “In co-operation with KR, we are able to verify and certify a test ship equipped with autonomous operating systems based on DSME’s own smart ship solution DS4. We aim to make our position solid in the future autonomous ships market.”

Daeheon Kim, EVP KR R&D Division said: ”As the shipbuilding industry gradually heads towards smart, autonomous, and unmanned ships, this is a great opportunity to apply KR’s guidance to DSME’s test ship and its autonomous operating systems. We will provide technological support to ensure the development of autonomous ship technology and advanced certification through our co-operation with DSME, acting as a cornerstone for international standardisation.”