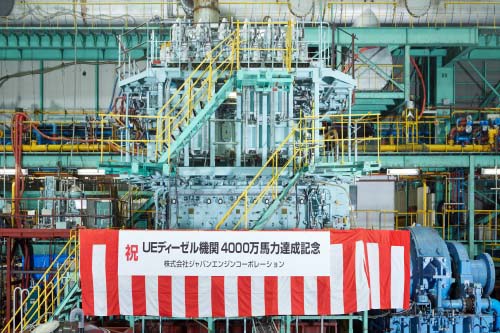 With the completion of a 6UEC42LSH-Eco-D3-EGR engine for a Handy-size bulk carrier built by Imabari Shipbuilding, Japan Engine Corporation (J-Eng) has achieved cumulative production of 40 million horsepower, from a total of 4,586 individual UE engines.

The UE engine is a purely domestic manufactured, so called ‘Hinomaru’, low-speed marine engine independently developed by J-Eng, the joint venture company formed by Mitsubishi and Kobe Diesel. The engine was first conceived about three quarters of a century ago, when Japan was on the cusp of rapid economic growth and advocated becoming a shipbuilding and shipping nation. The first UE engine was completed in 1955. For about 70 years, J-Eng has received patronage and support of many shipping companies, shipyards, and business partners, as well as partnerships with licensees such as Akasaka Diesels.

Current, J-Eng orders and manufactures the UEC-LSH series, which in 42cm bore, six-cylinder form is an ultra-low fuel consumption engine, for Handy-sized bulk carriers built by domestic shipyards. There is additionally a large order book and promising business negotiations for 50cm bore version, and the MGO mono-fuelled UEC35LSJ. The company expects to continue operating at an extremely high level in the future. In addition, Chinese licensees Guangzhou Diesel Engine Factory and Zhejiang Yungpu Diesel Engine Co have seen a surge in orders and have already started full-scale production. J-Eng technical advisors provide technical guidance and support to maintain and improve the quality of engines manufactured by Chinese licensees by supplying main components which are made in Japan.

Currently, J-Eng is working on the development of ammonia-fuelled and hydrogen-fuelled engines with the support of the Green Innovation Fund Project toward the realisation of carbon neutrality in 2050. The company is investing in factory facilities for these new-fuel engines. These will form the core initiatives of J-Eng’s ESG management in the future.

J-Eng regards the achievement of 40m horsepower in cumulative UE engine production as a milestone, and will further deepen cooperation with its business partners and licensees in domestic and overseas.