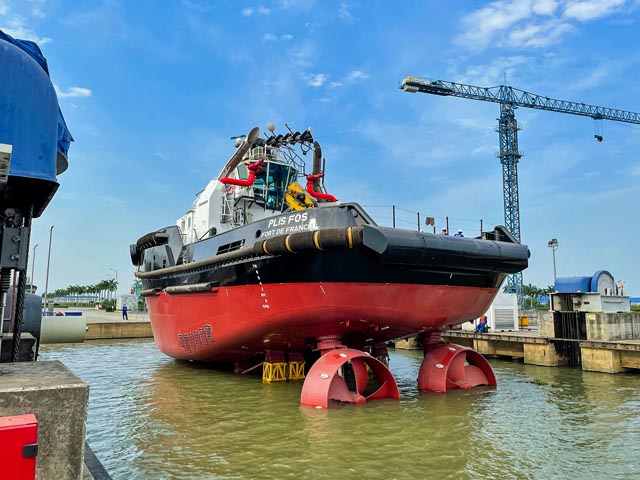 Azimuth Stern Drive tug ‘Plis Fos’ has been launched from the vertical ship lift at the Damen Song Cam Shipyard, and following sea trials, the vessel will sail on her own keel from Vietnam to the Isle of Martinique in the Caribbean Sea, where she will be taken into service at the Port of Fort de France by Somara.

With about 85t bollard pull, the 27.59m tug with 12,93m beam will take care of manoeuvring the largest ships that enter the Port of Fort de France. Thanks to her twin 3m diameter propellers in nozzles that rotate 360 degrees, the vessel also delivers almost 80t of bollard pull backwards. Two Caterpillar engines deliver 5050 kW combined. Thanks to exhaust gas aftertreatment, the ASD Tug 2813 is compliant to IMO Tier III emission standards, ensuring clean operations with minimal environmental impact in the Martinique waters. Plis Fos is outfitted as a versatile vessel, capable of multiple tasks like offshore towing, salvage, and ship handling. It is believed to be the strongest and most modern tug in the Caribbean, upgrading the regional fleet and placing Somara in a competitive place for years ahead.

Somara president Jean Pierre Porry said: “We are very pleased to have chosen this state of the art tug proposed by Damen because it was meeting with all our expectations. Also, because we are very pleased with the recent delivery of a Damen Multi Cat, it is without hesitation that we placed this new order. This tug will enable us to follow the needs expressed by our clients and the Grand Port Maritime de la Martinique in terms of bollard pull but also in terms of low emissions. Everyone at Somara is looking forward to the tug Plis Fos starting her operations.”

Delivery to  Fort de France is planned in the second half of 2022.