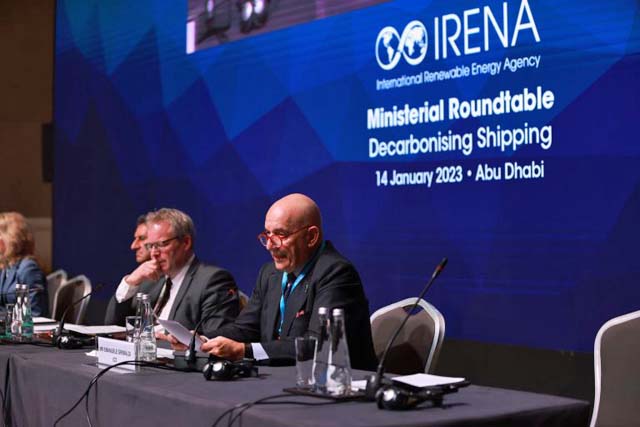 IRENA has welcomed the CEM Hubs initiative, a cross-sectoral public-private platform aimed to accelerate the production, transport and use of low-carbon fuels that will be transported by shipping for the world, implemented by the International Chamber of Shipping (ICS), the International Association of Ports & Harbors (IAPH) and the Clean Energy Ministerial (CEM).

IRENA is a global intergovernmental agency for energy transformation and its membership comprises 168 countries and the European Union. IRENA’s support bridges the shipping industry and ports with the renewable energy sector. IRENA is considered the principal platform for international cooperation; boasting near-global membership it supports stakeholders in their energy transitions, and brings insights, best practices, data analysis and knowledge to the CEM Hubs initiative.

The CEM Hubs Initiative taskforce, with other members of the shipping industry, actively engaged in a Ministerial Roundtable at IRENA’s  13th Assembly and joined in the discussions about renewable energy generation to produce low-carbon fuels, strategies going forward and the role of shipping and ports, to support the wider energy transition. IRENA will continue to expand its collaboration with ICS and partners in the shipping sector to further strengthen the CEM Hubs initiative and accelerate the use of renewables-based fuels in the shipping and other end-use sectors.

Francesco La Camera, Director General IRENA said: “The successful decarbonisation of the shipping sector is a story of massive deployment of renewable electricity and electrolyser technology. The decarbonisation of this sector needs to have a collaborative approach. Collaborative efforts involving the global shipping industry, governments and international organisations are key to achieve meaningful progress and build a more sustainable future for all of us. We need to build new pillars of infrastructure including a network of ports for green hydrogen trade, connecting new points of supply and demand. We need initiatives like the ‘Clean Energy Marine Hubs’ to drive action.”

ICS Chairman Emanuele Grimaldi added: “We would like to thank IRENA and Francesco La Camera for inviting us to be part of IRENA’s 13th Assembly and these critical discussions. Renewable energy generation is not only vital for shipping but for the whole world, as it is a key component to scale the availability of low-carbon fuels. We can all no longer work in silos if we are to meet global decarbonisation goals. Governments, ports, renewable energy producers and the shipping industry all have a role to play and the CEM Hubs initiative provides the platform to push this forward. The time for talking is over – it is time for action. Going forward the CEM Hubs initiative will continue to strengthen the key link between the energy and maritime industries and to catalyse the global energy transformation and de-risk future investments. With COP28 just around the corner, we look forward to collectively working together with the UAE and IRENA to ensure that shipping plays its full part in the global fight to address climate change.”

Patrick Verhoeven, MD IAPH said: “With the joint collaboration of shipping, energy extractors and governments, ports can become the clean maritime energy hubs that catalyse shipping’s wider decarbonisation. Yet further government and institutional support is essential to provide the reassurances the private sector needs to invest in zero carbon fuels and onshore power provisions. Working with such a prominent intergovernmental agency for energy transformation as IRENA is vital to that process.”

Dr Prasoon Agarwal, Acting Head of Secretariat, CEM, concluded: “To further the progress of global clean energy deployment, today’s discussions at the IRENA Assembly has once again highlighted the importance of developing a truly international Clean Energy Marine Hub. We are excited for the CEM Hubs to be launched as a Clean Energy Ministerial initiative in the upcoming ministerial in India. Structured as a public-private collaborative, the CEM Hubs will address a key missing piece in the global clean energy transition by bringing together policy makers, experts and industry leaders from across sectors such as energy, shipping, ports and finance. The CEM’s current global initiatives on hydrogen, biofuels, and industry decarbonisation, among others, would further strengthen to elevate the Hubs.”