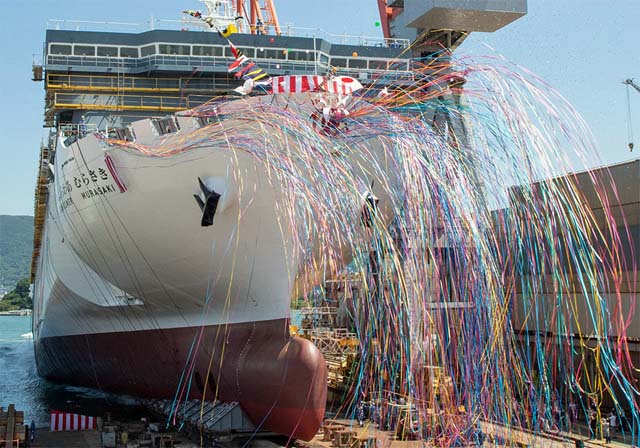 This is the second such vessel built by MHI for MOL, the first, Sunflower Kurenai, being launched earlier in 2022. The handover is scheduled for March 2023, following completion of interior work and sea trials. The new vessel will go into service on a regular route between Osaka and Beppu operated by MOL company Ferry Sunflower, replacing the Sunflower Ivory and Sunflower Cobalt ferries in service since 1997.

The Sunflower Murasaki is 199.9m long and 28.0m wide, with tonnage of about 17,300gt. The vessel has capacity to accommodate 716 passengers, an estimated 137 13m trucks, and roughly 100 passenger cars. The main engine is a high-performance dual-fuel engine – thought to be the first of its kind featured on a Japanese domestic ferry – that can run on both LNG and A-type heavy oil. It achieves a reduction of more than 20% in CO2 emissions and close to zero emissions of SOx, thereby mitigating environmental impact.

As part of MHI Group’s strategic initiatives to advance the energy transition, Mitsubishi Shipbuilding is reducing the carbon footprint of the maritime industry through construction of LNG-fuelled ships, as a way of contributing to realisation of a carbon neutral society. Japan today is undergoing a modal shift from land to maritime transport in a quest to reduce carbon emissions as well as to offset a shortage of truck drivers and achieve workstyle reform.