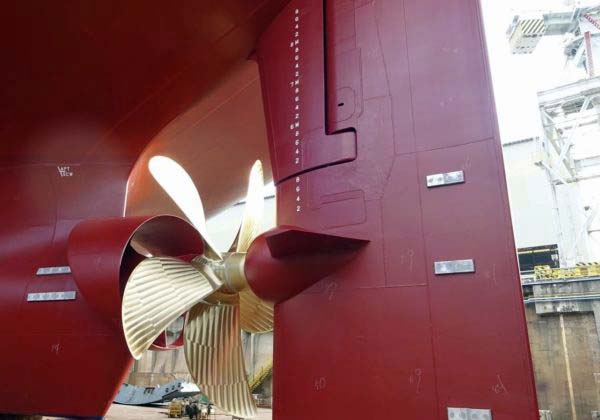 Oldendorff Carriers has ordered Becker Mewis ducts and rudder bulbs for another 12 ships (seven Babycapes and five Post-panamaxes), which will be installed during the first half of 2023, in a bid to further increase fuel efficiency and thus cut emissions.

The company has procured nearly 50 fuel saving duct devices so far, and has begun various other initiatives to reduce fuel consumption and emissions. In the early 1980s, Oldendorff Carriers was the first dry bulk shipping company to invest in Wake Equalizing Ducts (WED), with ‘Schneekluth’ fuel saving ducts fitted to 74,000 dwt Panamax newbuildings Ludolf Oldendorff and Helga Oldendorff. In the existing fleet, with the latest order, WEDs will be installed on 45 bulk carriers of 36,000 dwt to 209,000 dwt capacity. In addition, at least 20 ships have asymmetric fins, rudder bulbs, boss cap fin propellers and other fuel savings devices.

Furthermore, since 2019, Oldendorff has invested more than US$ 300m in Exhaust Gas Cleaning System (EGCS), which abate nearly all of the sulphur oxide emissions. According to the company, compared to ships that burn VLSFO without such systems, its ships emit up to 90% less particulate matter and up to 60% less black carbon than ships consuming VLSFO, which leads to much cleaner exhaust at sea and in port.