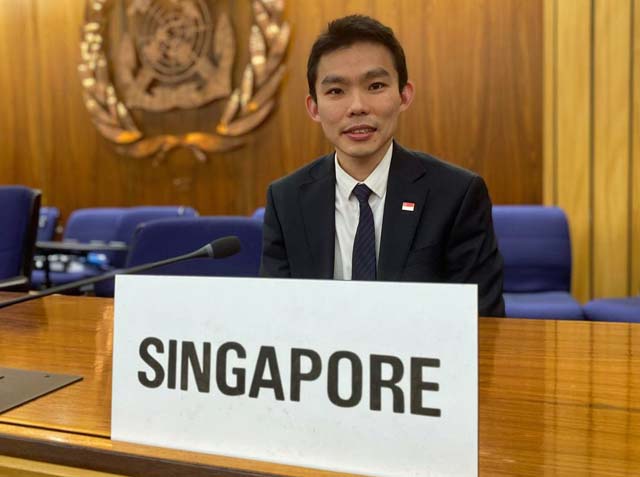 The Maritime and Port Authority of Singapore (MPA) has announced that one of its officers, Tan Hanqiang, currently First Secretary (Maritime), High Commission of the Republic of Singapore to the UK, has been appointed by the IMO as Vice-Chair of the IMO Marine Environment Protection Committee (MEPC), succeeding Harry Conway of Liberia.

This marks the first time a Singaporean has assumed the Vice-Chair appointment for the IMO MEPC since its inception in 1985. Previously, MPA’s Assistant Chief Executive (Operations), Capt M Segar, served as the Vice-Chair of IMO’s Maritime Safety Committee from 2012 to 2015. As one of the five main Committees at the IMO, the MEPC addresses environmental issues under the IMO’s remit including the decarbonisation of the global maritime sector, control and prevention of ship-sourced pollution such as air pollutants, as well as matters such as ballast water management and pollution preparedness and response.

The appointment is considered a recognition of Singapore’s commitment to a multilateral, rules-based approach for international shipping and supports Singapore’s long-standing efforts as a bridge-builder to bring together parties for constructive dialogue and consensus-building at various international fora, including climate change efforts. With the impact of climate change and the maritime industry’s transformation to meet global targets for decarbonisation, Singapore will support the IMO by sharing expertise and co-developing global standards with other Member States to drive the decarbonisation of the maritime sector.

Mr Tan has been Singapore’s Liaison Officer to the IMO since 2019, during which he has represented Singapore at IMO-related meetings. He has worked with the IMO Secretariat on various IMO-Singapore projects such as NextGEN and Future of Shipping Conferences.

Tan Hanqiang said: “I am honoured and humbled to take on the role of Vice-Chair of the Marine Environment Protection Committee and look forward to supporting the Chair and working with fellow Member States to advance the interests of the international maritime community to safeguard the marine environment and bring the maritime industry closer to the United Nations sustainable development goals and maritime decarbonisation efforts through partnership, and mutually-beneficial initiatives in an inclusive and progressive manner.”

Singapore has been a member of the IMO Council since 1993. As an IMO Council member, Singapore has played an active role in the organisation to advance the interests of the international maritime community, including to drive digitalisation and decarbonisation efforts, enhance navigational safety, promote efficient and sustainable shipping, and protect the marine environment.