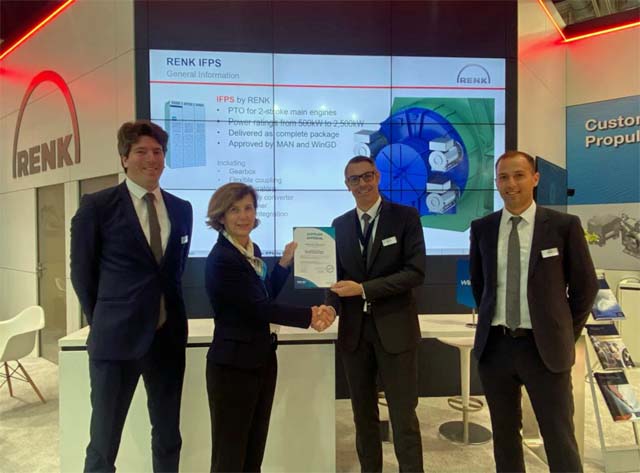 With WinGD announcing its approval, both of the main designers of two-stroke-engines now list the Integrated Front-end Power System (IFPS) by Renk as an approved power take-off (PTO) solution for two-stroke-engines.

IFPS is offered as a solution to save fuel consumption thereby reducing the CO2 footprint of vessels. With both the EEXI for existing vessels as well as the EEDI for new ships intensifying their demands regarding fuel saving and sustainability, PTO-solutions are one important component in order to comply with the new and challenging regulations.

Dr Monika Damani, GM Production Support, WinGD, said: “The solutions we are working on for our customers go much further than just fuel flexibility in the engine, such as ammonia and methanol. We also look very closely at solutions to improve overall efficiency, regardless of the fuel choice and we are happy to approve Renk as an official supplier for their IFPS PTO system. ”

Sven Schemmink, Maritime Sales, Renk said: “The topic is more important than ever and the IFPS is a reliable, space-saving and very efficient way to make ships more sustainable.”

WinGD endorses the approach of using energy that already exists on the ship for the power grid. This principle will make gensets and their demands for additional fuel more and more obsolete.

Damani added: “Many customers ask us about solutions that save fuel and lower the CO2 emissions.”

That is not only the case for new ships and engines coming from the factories, but the IFPS is a favourable solution for retrofits.

Dominik Elskamp, IFPS project engineer Renk said: “The IFPS can be easily attached at the accessible end of the drivetrain and does not need to be installed expensively. With its slim and space-saving design it will fit in any engine room.”

Damani said: “There are a number of positive outcomes this IFPS installation brings to our customers.”

As products that save fuel and CO2 are becoming more and more important, Renk believes that IFPS will help define new standards for sustainable shipbuilding as well as rewarding retrofits. The IFPS is expected to bring benefits both for operators as well as the environment.

Schemmink concluded: “With an unmatched efficiency rate of 91%, an easy scalability up to 2500 kW, a high reliability and compatibility as well as a very stable operating mode on board of the vessel, we see the IFPS as unbeatable on the market right now and in the foreseeable future.”