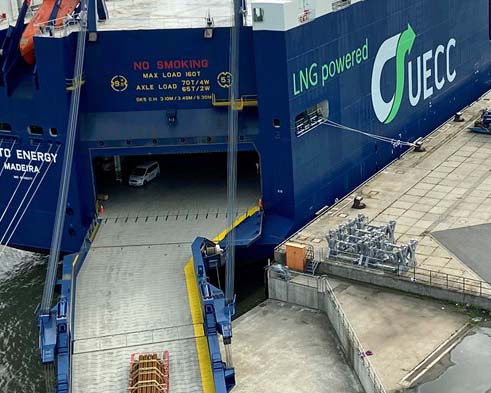 UECC is calling for “aggressive” emissions targets to be set by the EU under the proposed move to include shipping in the Emissions Trading System (ETS) that it believes will level the playing field by hugely increasing operating costs for pollutive vessels operating in European waters.

It follows the announcement of the EU’s ‘Fit for 55’ policy package that includes a proposal to expand the ETS to cover CO2 emissions from the shipping industry for the first time, towards the EU’s goal of reducing the bloc’s greenhouse gas emissions by at least 55% below 1990 levels within 2030. This would mean that all large ships over 5000gt, regardless of flag, calling at EU ports would be required to pay for all their emissions, as well as 50% of emissions for all voyages starting or ending at EU ports, under the proposal still subject to ratification by the European Commission. To ease the financial pain on ship operators, the EU has proposed to phase in the measure starting from 2023 when they would be liable for 20% of their emissions, increasing to 45% in 2024, 70% in 2025 and the full amount in 2026.

“Putting a price on carbon is unfortunately the only way we will see the huge decarbonisation of the fleet that is required by incentivising the use of green technologies and alternative fuels to lower emissions, though this should be a moral and ethical obligation,” said UECC energy and sustainability manager Daniel Gent.

Gent believes implementation of the ETS, which would require ship operators to buy carbon credit allocations to offset emissions above a certain capped level, is set to “massively” equalise the market playing field for environmentally focused operators like UECC.

“We are calling for aggressive allocations from the outset, with meaningful targets from 2026 that challenge ship operators to invest in greener technology,” said Gent.

Based on current prices, ships would be required to pay more than €50/t of CO2 emitted once the system is fully phased in, which would make the use of marine fuel oil between 20% and 30% more expensive – but Gent expects the effective bunker cost increase to be as much as 50% with an increasing carbon price.

Given fuel consumption can account for 50% to 60% of a ship’s operating cost, such an emissions surcharge – essentially a carbon tax – is likely to send shivers down the collective spine of shipowners with ‘dirty’ fleets running on more pollutive fuels.

Gent said: “Many shipping companies will struggle to absorb even the current level of carbon pricing based on the emissions profile of their fleets, with these higher costs set to be passed onto cargo owners, charterers and consumers. As a shipowner that has been proactively investing in green tonnage and alternative fuels for some years, UECC has seen this development coming and is well-positioned to protect all stakeholders under this changed market scenario.”

The company has upgraded its fleet with two of the first dual-fuel LNG pure car and truck carriers (PCTCs) launched five years ago that meet the IMO’s goal to cut carbon intensity by 40% within 2030. Three more pioneering newbuild LNG battery hybrid dual-fuel PCTCs are being delivered this year and in 2022 that will give UECC five eco-friendly vessels out of a nine-vessel owned fleet – plus nine chartered-in vessels – and further reduce its emissions profile. In addition, the company is running its PCTC Autosky on biofuel under a pilot project and will have 80% of its lifting capacity meeting or exceeding the IMO target by next year as a result of its investments in newbuilds and alternative fuels.

Consequently, Gent expects UECC to boost the CO2 emissions reduction from its fleet from 20,000 tonnes last year to as much as 35,000 tonnes by 2025 – a significant cut in a shipping sector that emits 940 million tonnes of CO2 annually and accounts for 2.5% of global emissions.

He said: “Our strategy is to demonstrate to the industry that decarbonisation can be achieved incrementally and in a scalable way by rolling out pilot projects with clients for carbon-neutral transport of cargoes, thereby making the market more competitive for green owners. Many shipowners are waiting for a silver bullet but a single solution to fix everything does not exist. We have adopted LNG as an alternative fuel system that can deliver immediate emissions gains and is adaptable for greener drop-in fuels in future.”

Given the shipping industry’s big carbon footprint, Gent wants to see the EU set ambitious emissions targets for ship operators – with revised goals to be rolled out every five years from 2025 to 2050 – to achieve similar reductions of around 43% from other industrial sectors within the ETS. A separate proposal in the EU’s policy package, dubbed FuelEU Maritime, requires more uptake of alternative low-carbon fuels from 2025 to help drive down emissions faster.

The EU directive defines the emissions owner as the shipowner or any other entity, such as the manager or the bareboat charterer, that has assumed responsibility for operation of the ship, but Gent says this presents an “interesting conundrum” in relation to the polluter-pays principle. Although the shipowner is required to report the level of emissions from its vessels under the EU’s Monitoring, Reporting and Verification (MRV) system, it is the commercial operator that makes decisions on fuel use, speed, cargo volume and itinerary that determine emissions under time charters that account for most charter contracts.

“Clearly, investments in green tonnage have to be made by the shipowner for customers to benefit under the ETS regime so there needs to be an incentive for this with a contractual mechanism in place whereby ownership of emissions is transferred to the charterer for contracts to be aligned with the directive,” Gent said.

He also believes 50% of revenue from auctioning of allocations under the ETS should be ploughed back into a so-called Maritime Transport Decarbonisation Fund, with the remainder going to EU climate action, to stimulate investments by the shipping industry in low-carbon technologies by providing finance to support the green transition.

Such a fund would also help to stabilise the carbon price amid fears of price volatility under the ETS, with the industry calling for a more universal and predictable price regime to enable shipping companies to plan ahead as the IMO has dragged its heels on implementing a global system.

Gent said: “The wheels need to be set in motion to level the playing field at the global level, although I empathise with policymakers as regulating and enforcing this is very difficult. A possible solution in the medium term would be to impose a universal bunker tax on fuel. There is no doubt this will be a huge commercial driver for green investments and there will be severe financial penalties for those owners that have failed to invest in their fleets by 2026. Inaction will prove costly.”