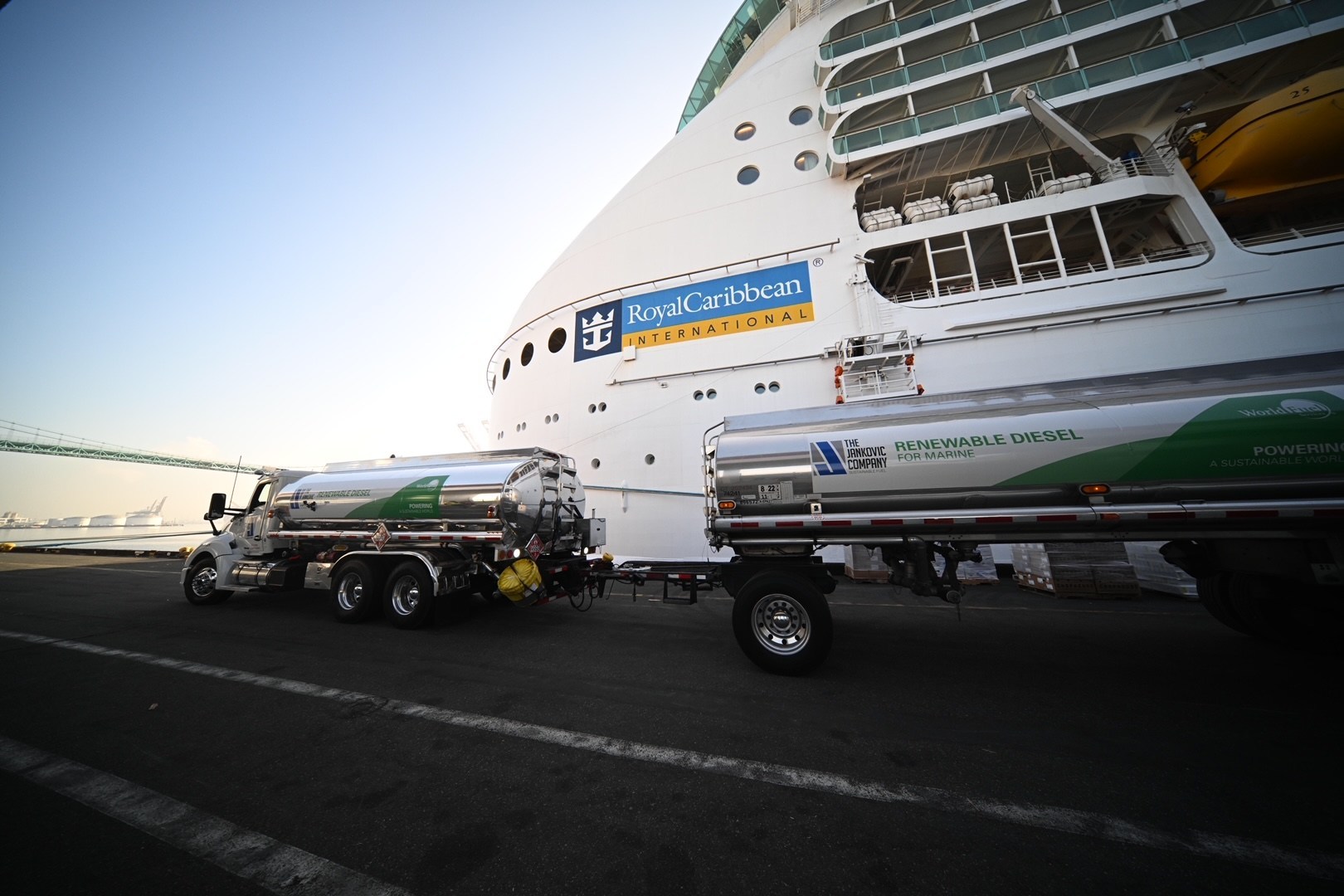 Royal Caribbean Group has become the first major cruise line operator to sail a cruise ship from a US port while using renewable diesel fuel to meet part of the ship’s fuel needs when ‘Navigator of the Seas’ set sail from the Port of Los Angeles.

Part of the Group’s cruise line, Royal Caribbean International, the use of renewable fuel will reduce the ship’s carbon emissions. This key step in the Group’s pursuit of alternative fuels comes less than a year after the unveiling of Destination Net Zero, Royal Caribbean Group’s decarbonisation strategy.

Laura Hodges Bethge, Royal Caribbean Group EVP Shared Services Operations said: “We are committed to investing in technologies and innovations that will help us reduce emissions and fulfill our purpose to deliver great vacations responsibly,. As we celebrate this milestone, we continue to set our sights on other leading alternative solutions to meet our net zero goals.”

The renewable fuel being used by Navigator of the Seas contains less carbon than traditional marine fuels. While this fuel is produced from renewable raw materials, the production process for this fuel makes it molecularly identical to traditional marine gas oil — creating a ‘drop in’ fuel that can be safely used with the ship’s existing engines.

The cruise company plans to continue using lower carbon fuel to meet part of the Los Angeles-based ship’s fuel needs as it evaluates the feasibility for long-term use, with ambitions to expand its usage to other ships across the fleet. This follows a similar trial by the Group’s joint venture partner, Hapag-Lloyd Cruises, which is exploring a different process for developing a sustainable biofuel.

Michael J Kasbar, Chairman and CEO, World Fuel Services Corporation, said: “We are extremely proud to be a part of Royal Caribbean Group’s journey toward making the cruise industry more sustainable by leveraging our renewable fuel distribution capabilities and technical expertise to facilitate the use of renewable fuel in a marine application.”

In addition to testing the use of biofuel aboard Navigator of the Seas, Royal Caribbean Group is set to debut the cruise industry’s first hybrid-powered ship in summer 2023, as part of Silversea Cruises newest class of ships, the Nova class. The Group is also working to reduce emissions while at port by investing in shore power on its ships and collaborating with key cruise ports for its use. For example, in 2021, Royal Caribbean Group signed an agreement to bring shore power to PortMiami, which will enable ships to use electricity at port instead of burning fuel. The company also is introducing a new zero-energy cruise terminal in the Port of Galveston, Texas, that builds on its sustainable design efforts and will be a LEED-Gold certified facility.