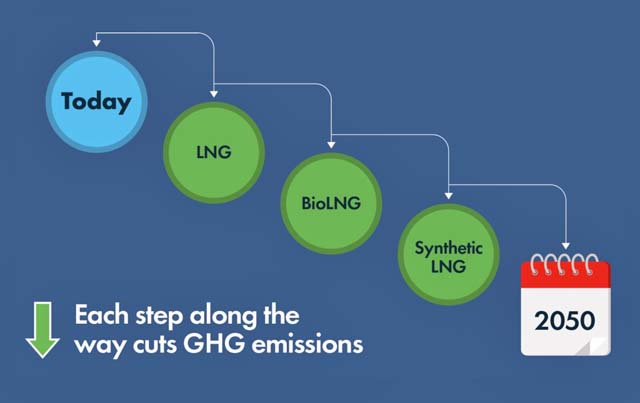 LNG industry collective Sea-LNG has issued its response to a report by the NGO International Council on Clean Transportation (ICTC): ‘Comparing the Future Demand for, Supply of, and Life-Cycle Emissions from Bio, Synthetic, and Fossil LNG Marine Fuels in the European Union’.

Sea-LNG belives that the recent ICCT study comparing the demand for, supply of and life-cycle emissions from bio, synthetic and fossil LNG marine fuels is flawed. It is underpinned by old data and unrealistic assumptions, and does not take into account developments in the LNG-fuelled fleet and ongoing technology innovations. As such the report misrepresents the benefits the LNG pathway offers shipping’s decarbonisation transition.

The ICCT significantly understates the potential availability of bioLNG for shipping in Europe and massively overstates its costs. It estimates that a maximum of 700 PJ (Peta Joules) of bioLNG could be available in 2030 if shipowners, operators, and charterers are willing to pay up to €216/GJ. This compares to the current volumes of European biomethane production of 690 PJ – from anaerobic digestion, only – at a cost of €14-25/GJ as reported by the European Biogas Association in December 2021.

As the ICCT correctly states the supply of e-LNG is potentially unlimited but, as with other electro fuels such as e-methanol, e-ammonia and e-diesel, it will be extremely expensive. Approximately 80% of the cost of producing these fuels is associated with the cost of producing the common renewable hydrogen feedstock. Predicting the production costs of these fuels in 2030, let alone 2050, is highly problematic and dependent on many different assumptions.

The ICCT’s estimates of life-cycle, or Well-to-Wake (WtW), CO2e emissions for LNG-fuelled vessels in 2030 are based on historic vessel fleet data that is dominated by older, obsolete four-stroke low pressure dual fuel diesel electric engine technologies which have relatively high levels of methane slip. The reality is quite different. Current DNV data on the LNG order book shows that approximately 75% of the LNG-fuelled new builds will use two-stroke engines. These two-stroke engines are used in deep sea shipping where 70%-80% of marine fuel is burned and the majority of GHG emissions generated. Of the two-strokes on order, about 70% are high pressure diesel technologies which have negligible methane slip.

Further, in terms of their WtW GHG emissions calculations, the ICCT appears to use secondary data based on old engine technologies which suggest a maximum lifecycle benefit of a 15% reduction in CO2e emissions when using fossil LNG as a marine fuel compared to marine gas oil (MGO). This compares to reductions of up to 23% in GHG emissions calculated by Sphera in its 2021 study which is based on primary data from all major engine manufacturers and includes methane emissions. This study, widely recognised as the most definitive analysis of the GHG emissions of LNG as a marine fuel is not referenced.

The ICCT’s analysis, while forward looking, takes a static view on methane slip – it also does not appear to recognise the continuing improvements in engine technologies. Levels of methane slip have been reduced by a factor of four since LNG-fuelled engines were first introduced at the turn of the century. The Sphera study reported that by 2030 methane slip should have been virtually eliminated for all engine types as a consequence of engine manufacturer innovations and programmes such as the recently launched Methane Abatement in Maritime (MAM) Innovation Initiative.

It should also be noted that the ICCT emphasises the calculation of GHG emissions on 20-year global warming potential (GWP20) basis when the United Nations Framework Convention on Climate Change (UNFCCC) has adopted the 100-year GWP (GWP100) as the most relevant metric for national inventory reporting as it maintains policy focus on CO2 as the main GHG to address. Consistency and clarity on metrics are key when addressing climate challenges – the same GWP factor needs to be used for shipping (responsible for approximately 0.05% of global anthropogenic methane emissions) as for other sectors such as agriculture (39.6%), energy (37.9%) and waste (20.5%).

Based on its flawed analysis on the availability and cost of bioLNG and estimates of GHG emissions, the ICCT misleadingly suggests levels of public support required for the LNG pathway amounting to approximately €18bn/yr in Europe in 2030. In addition to the numbers being highly questionable they are also stated without any context. All future alternative fuel solutions will be more expensive than continuing to use fossil fuels, but the ICCT makes no attempt to quantify the levels of support required for other decarbonisation solutions which are based on unproven technologies (ammonia and hydrogen) and will require massive new infrastructure investments. Note, the infrastructure challenge is illustrated by the fact that natural gas is responsible for about 25% of global energy supply (of which LNG accounts for 3.1%) – the comparable figure for methanol is less than 0.001%.

Finally, the ICCT makes no attempt to analyse the GHG emissions implications of choosing different decarbonisation pathways – the methanol, ammonia, hydrogen and (synthetic) diesel pathways will all start with fossil methanol, fossil ammonia, fossil hydrogen and fossil diesel as renewable versions of these fuels will not be available at scale for at least a decade or so. The fossil versions of these fuels have far higher WtW GHG emissions not only than LNG but, in the case of methanol, ammonia and hydrogen, the traditional marine fuels they are seeking to replace.

It is Sea-LNG’s view that waiting is not an option – LNG as a marine fuel delivers immediate GHG benefits and a lower risk, lower cost, incremental pathway to zero emissions through bioLNG in the near term and e-LNG as and when plentiful supplies of renewable electricity come on stream. Waiting or committing to solutions which rely on alternative fuels which will not be available at commercial scale in a renewable form for the foreseeable future, means owners locking in higher emissions and higher cost decarbonisation pathways.