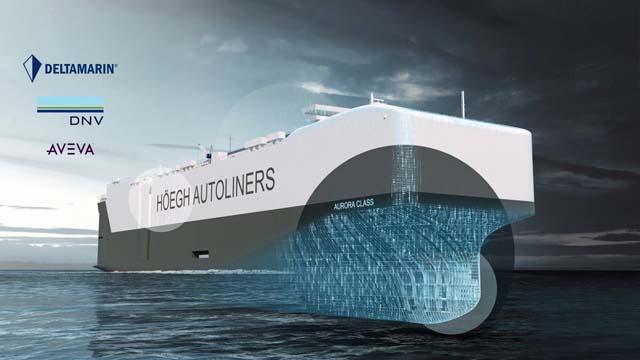 The three companies have been cooperating on streamlining the approval processes of classification materials from drawings to 3D models using the new Open Class 3D Exchange (OCX) standard. Deltamarin, DNV and Aveva continue to combine their expertise to take the next big step towards the future of design processes. Deltamarin completed part of the steel design work for the Aurora Class PCTCs with the use of Aveva’s new E3D software and in close collaboration with Aveva’s skilled marine team. E3D is the next generation design software which has OCX export capability together with other innovative features.

OCX is a new standard for 3D model-based class approval with the purpose of breaking the barriers between different design and software platforms to enable the seamless exchange of idealised geometry and metadata between them. The OCX 3D model can replace the traditional 2D structure drawings, thereby saving time for Deltamarin and allowing DNV to respond more quickly to designer’s needs. The OCX standard is the result of the joint industry project ‘Approved (2016-2020)’ headed by DNV. The standard is now jointly owned and managed by the OCX Consortium established in 2021. This consortium has brought together more than 30 industry leaders to jointly promote and maintain the standard. The members consist of all the major classification societies, significant CAD vendors and several designers and yards.

Janne Uotila, CEO Deltamarin said: “Increasing productivity and shortening the calendar time for design through digitalisation is one of the internal development areas we have been focusing on at Deltamarin. This is a great practical example of that.”

Geir Dugstad, Director of Ship Classification and Technical Director DNV said: “Moving away from 2D structure drawings to a 3D digital twin is a milestone for the maritime industry. This opens up for new possibilities in asset data management, which I strongly believe will drive the safety and reliability of ship’s design and operation. A good example would be a more efficient process for verifying rule compliance. The OCX format helps designers to control and optimise their designs, and enables DNV to confirm rule compliance directly on the 3D design model.”

Hervé Lours, VP Marine Aveva concluded: “Aveva’s mission has been about increasing productivity in ship design, manufacturing and operations for decades; providing Deltamarin, DNV and the OCX Consortium with our expertise to break the silos and ease data exchange between software and players was then a no brainer; this success highlights an additional value of the digital twin and paves the way for an even larger adoption in the maritime industry”

Deltamarin, DNV and Aveva are all said to be excited about this new step towards the future of ship design.